Passepartouts lend pictures more presence and have a noble effect

Kirchen, May 4, 2021 - The unity of picture-passepartout-frame is of considerable importance so that a picture can unfold its full radiance. Whether it is a high-quality fine art print, an old family photo with a deckle edge or a rare lithograph with a signature - there are many motifs worthy of framing. Imaginativeness and aesthetic feeling are required for a framing that is to underline the artistic quality and impact of a picture. In addition to the selection of the passepartout-colour - the passepartout-Art and the cutting should be given the greatest attention. For 75 years, the team at HALBE has known the subtleties that must be observed in perfect framing with passepartout so that the viewer's gaze is drawn to the picture and remains in his memory.

Expressive framing is the be-all and end-all

There are many reasons to frame a picture, a photograph or a graphic. It is only through an individual framing with or without passepartout that every work of art really comes into its own. In the 1930s, no other photographer captured the mood of Parisian nightlife like the Hungarian Gyula Halász Brassai, who was called the "photographer of Montparnasse". He once said that there are many photographs that are full of life, but still difficult to remember. What is important is the impact of a photograph so that it will be remembered by the viewer. Therefore, many artists, art lovers and gallery owners pay full attention to the framing of a picture worthy of protection.

There are numerous ways of setting the scene for small and large works of art - a classic stylistic device is the use of a passe-partout, i.e. a background cardboard cut out in the middle is placed in the frame between the picture and the glass. As a general rule, a high-quality passepartout cardboard of museum quality should be used for framing, which is free of lignified fibres and light-resistant. It does not attack the artwork over time, but provides active protection against possible aging damage. In addition, a museum-quality passepartout will look as beautiful for decades as it did on the first day, as it will not yellow or form unsightly stains.

There are passepartout cartons in different thicknesses, common are 1.5 mm and 3.0 mm. Many experts say that thicker mounts make pictures look more vivid and intensify the unique depth effect. In addition to the aesthetic aspect, mounts have an important function in conservation framing - the picture and glass cannot come into contact with each other.

If the picture is to be placed on a sideboard or side table in the future, framing with passepartout up to the 18 x 24 cm format is recommended. Of course, pictures can also be framed flush without passepartout. Very large works from 100 x 140 cm are particularly suitable for this, but often appear more imposing if they are given additional space by a passepartout.

Passepartout cut-out - decisive for the impact

The passepartout cut-out is based on the dimensions of the picture - it should be 5 mm smaller than the picture on all sides so that the edge of the picture is well covered and a firm flatness is guaranteed. The millimetre-accurate cut-out is cut diagonally inwards at a 45 degree angle so that the artwork can unfold in a multi-dimensional way. In addition, the inner beveled edges avoid shadows on the image and convey a sense of depth.

There are several placement options for a visually appealing design. In the past, the golden ratio was the rule of thumb for passepartout design - in this case, the image was placed far upwards. Today, and especially in modern works, the image is placed more centrally or in the so-called optical centre - i.e. the lower edge is a few millimetres wider than the upper edge. The optical center is perceived as comfortable by the viewer and prevents the artwork from visually running away downwards. Influenced by Instagram and Pinterest, modern square motifs are often placed in the middle.

Even a landscape format passepartout cut-out in a portrait format frame exudes a certain charm and supports the effect of the art object. If there are several small pictures, sketches or prints that complement each other in terms of content and colour, it is also suitable to frame them all together in a large square or rectangular frame with the corresponding passepartout cut-out. The many small photos thus form a large picture.

Passepartout colour - A sure instinct is required

Grey is anything but boring. In interiors, grey as a wall colour is the secret star due to its many facets. Depending on the colour nuance, grey appears cool or warm or sober or charming. "We have decided to include a light grey through-dyed passepartout board in museum quality in our product range with immediate effect," says David Halbe, Managing Director of HALBE-Rahmen GmbH.

No matter whether graphics, drawings or photography - a light grey passepartout has a pleasantly light and neutral effect at the same time. It blends in perfectly as a demarcation between the picture and its surroundings. On the other hand, it gives the artwork more presence than a white passepartout. Especially artistic works in pastel shades are perfectly set off by a light grey passepartout, but thanks to its colour neutrality it does not compete with the picture. Bright black-and-white photographs can be stylishly set off with light grey.

As a cardboard colour, the new grey goes perfectly with the timeless frame colours silver and black. But a white frame can also be combined with a light grey passepartout. Furthermore, if the picture is staged on a dark grey wall, it will surprise every viewer.

On the homepage https://www.halbe-rahmen.de/en/about-us/tour/customer-service/ you have the possibility to follow the way of your HALBE frame from the order to the dispatch as well as to get to know the people and their stories at HALBE. Lilli and Tim, for example, will take care of the millimetre-precise cutting of your passepartout. In addition, you will find many valuable tips on the subject of framing in the blog and knowledge area. 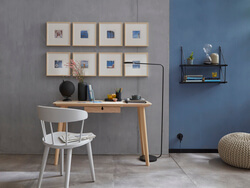 There are numerous ways to showcase artwork - a classic stylistic device is the use of a passe-partout. It gives the paintings more presence and protection in one. 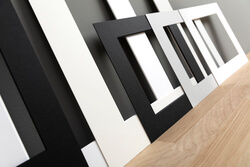 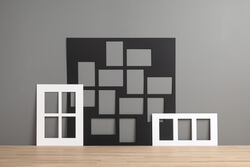 If there are several small pictures, sketches or prints that complement each other in terms of content and color, a joint framing in a large frame with a multiple-passepartout is also suitable. 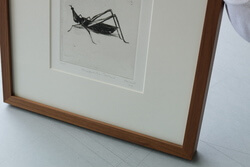 When cropping passepartout, care should be taken to ensure that an artist's signature is visible. 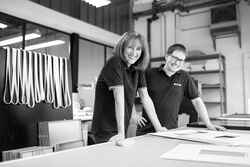 People at HALBE: Lilli and Tim take care of the millimetre-precise passepartout- and background cardboard cutting. They check every sheet and work with the greatest care. 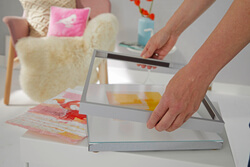 The magnetic frame principle of HALBE allows framing of artwork from the front. 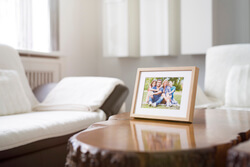 If the picture is to be placed on a sideboard or side table in the future, framing with passepartout up to the size 18 x 24 cm is recommended.