Picture Frame for Objects: Tips and Tricks for Distance Frames

Three-dimensional decorative elements make picture frames look like a small shop window. In order to set smaller objects in scene in a sophisticated way, a suitable distance or object frame is the right solution. In this short article on the subject of picture frames for objects, we will show you what you should look out for when making your selection and what design options are open to you.

Which picture frame is suitable for objects?

To bring 3D works of art to your own four walls, you need one thing above all: the right frame for objects. Picture frames with enough space between the back and the glass are the right choice.

Because the distance between the picture or passepartout and the glass pane is very large in picture frames for objects, these frames are also known as distance frames or object frames.

The larger the object you want to present in the picture frame, the greater the distance of the frame should also be. Deeper frames usually do better with smaller objects as well. The object should just not be chosen so small that it looks lost in the frame.

Presenting objects in a picture frame - design ideas for your home

Picture frame with object in front of a background

If you would like to place a smaller picture, or a cut-out figure made of cardboard or a similar material, in the distance frame, you will need to attach it. A simple trick that can be used well here is a stand. The sturdiest is a stand made of wood. You make it by sawing a thin slit in a small piece of molding. The piece of wood should not be too high, so that it is covered by the frame and does not disturb the visual impression.

Tip: A trick for those who want it even easier: An architect's clip makes a great makeshift stand.

Hanging objects in a picture frame

A distance frame offers objects enough space not only to stand them up, but also to hang them. Either attach small hooks inside the frame, or attach the string directly inside the frame with a drop of glue from a hot glue gun or super glue.

Tip: If you use the thinnest possible cord, preferably fishing line or a corresponding cord from the craft supplies, you will achieve the effect that the object "floats" in the frame.

1. Small jewels quite literally: Setting the scene for jewellery in a picture frame

Almost every woman owns one or two pieces of jewellery that are close to her heart but she no longer wears - the engagement ring from her grandmother or the earrings from her first date. In a picture frame for objects, they are beautifully presented, awaken fond memories and receive a new place of honour.

Branches, stones, shells, tickets, coins and other found objects from your holiday can be beautifully presented in a distance frame. The advantage over the classic scrapbook, which many create after the holiday: Three-dimensional items can be accommodated much better in the picture frame. How about a wall in your home that is entirely reserved for holiday or travel memories?

3. The distance frame through the seasons

A frame, a place to put it up or hang it, changing contents: How about a distance frame as a fixed element, which is always decorated anew in the change of the seasons? For example, in spring with Easter decorations or at Christmas time with Christmas tree baubles. The distance frame offers a lot of space for creative ideas and encourages much more redesigning than an ordinary picture frame. Such a design idea is also suitable for the children's room, because the tastes of the inhabitants change quickly. 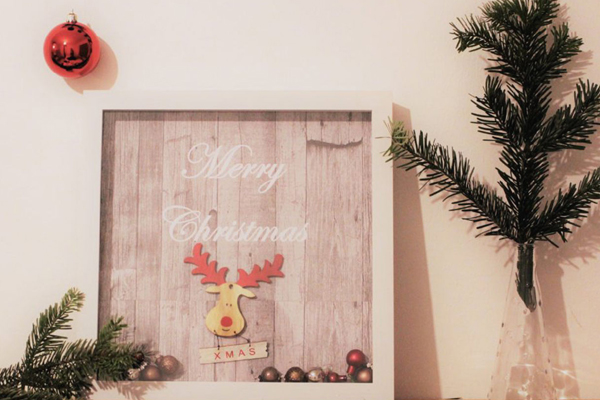 We hope that we could inspire you with these ideas and wish you a lot of fun with the selection and design of your picture frame for objects!