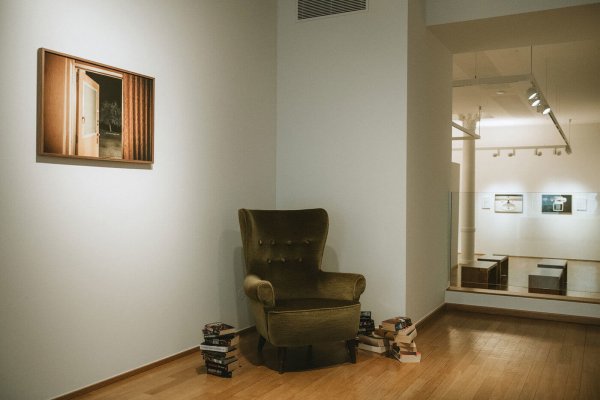 Since her early youth Véronique Kolber has been fascinated by the works of HP Lovecraft, Edgar Allan Poe and Stephen King, and since then attracted by their strange, dark and tense moods.

However, it was not only the stories and characters from these films and books, but also the United States of America, its mysteries and ordinary, if somehow strange, faces, that exerted an inexplicable attraction on the artist. During a period of 8 years she therefore travelled to the States several times. This resulted in her AMERICAN DIORAMA, a very personal series of photographs inspired by Eggleston and Shore about her travels and everyday life in America. Here the photographer combined street photography, portrait and landscape photography, but she also photographed unknown, unidentifiable places without recognizable human traces. These photographs evoke a feeling of déjà-vu and trigger a wave of associations in the viewer, just like a film that plays itself out.

Inspired by films and her own experiences as a film set photographer, Véronique Kolber develops this project to its current form: "fictitious location spotting for a non-existing movie". The photographs exhibited in the Cercle Cité are supplemented by excerpts from scripts by David Lynch, the Coen brothers and Christopher Nolan, among others, through which Véronique Kolber creates new associations and continues the original narratives - between homage and reinvention.

The artist presents her work in images where time stands still, waiting to be filled with stories and actions. She provides the canvas, the American mirage, and invites the viewer to complete the next scene.

By infiltrating the works of American filmmakers with her own screenplays, Véronique Kolber adds another dimension to them, hovering between autobiographical fiction and film reality. In this way she blurs the tracks between reality, appearance and collective imagination.

In addition, the photographer will show a 30-minute "film" consisting of still images and American "voice-off", for which the musician & composer Daniel Balthasar (Kolber's Mann and companion of the USA travels) has composed an exciting mysterious sound carpet.