Keji - On the Banks of the White Nile

The life of the Mundari

Gian Giovanoli has been showing the exhibition "Keji - On the Banks of the White Nile" at his L'Atelier in Pontresina, Switzerland since June 28, 2018. On display are photos about the life of the Mundari - a pastoralist people in South Sudan. The photos impressively document the strenuous daily work of the cattle herders on the banks of the White Nile. In addition to the photos, viewers are given the opportunity to learn more about the culture of this little-known people through informational texts. In addition, they are immersed even more deeply in this foreign world through soundscapes recorded live on site.

In addition to the exhibition "Keji - On the banks of the White Nile", other themed rooms can also be admired in the L'Atelier. Impressive Engadine landscapes, a very special representation of ibexes, as well as the exhibition "Transient Structures" complete the current offer of the L'Atelier. In the exhibition "Ephemeral Structures" Gian Giovanoli succeeds, with the aid of a microscope lens, in taking photographs of the smallest structures in the millennia-old glacier ice. The photographs show only a section of about 0.8 millimetres. Small pieces of ice are taken from the glacier on site, which are then intermediately cooled and subsequently photographed in a cold store. The finished images are then created by assembling over 600 individual photographs with ice from the Morteratsch, Tschierva, Forno and Fexer glaciers.

The opening hours of the exhibitions vary and can be found on the website https://www.giangiovanoli.com or by calling: +41 79 634 07 86. Individual opening hours are also possible on request.

The diverse works are presented to visitors in HALBE picture frames, which showcase the photos in the perfect way and enhance their effect. 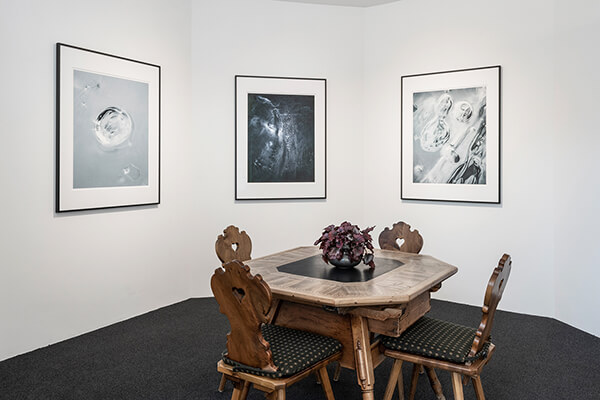 Gian Giovanoli is a Swiss photographer from Sils Maria in the Engadine. In July 2017, he opened his own studio in Pontresina - L'Atelier. Giovanoli has worked for a wide variety of companies throughout Europe. When he's not working for clients, he spends his time shooting stunning photos in the middle of the mountains. He also travels a lot, looking for different cultures and special faces all over the world. In doing so, he considers photography not only his profession, but also his passion and his destiny. The hunt for the perfect shot is always in the foreground.