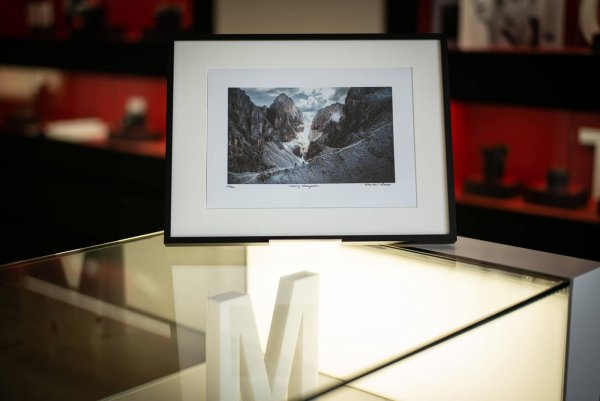 On August 22, 2020, Leitz-Park Wetzlar organized the first "Nature Day". Exciting lectures, sports and nature photography workshops as well as insights into the current product range of Leica Camera AG and Leica Sport Optics were the focus of attention.  The renowned bike photographer Markus Greber (www.markusgreber.com) led the sports photography workshops and presented his photograph "Crossing Rosengarten" in a HALBE magnetic frame to the participants and visitors of Leica Nature Day.

From editor to photographer

For many years Markus Greber was head of the test and technology department of a bike magazine. Around the turn of the millennium he discovered his love for photography. He used every spare minute to learn photography and invested a lot of money in high-quality equipment. At some point he was faced with the decision between two careers, editor or photographer. At the age of 39 he changed profession and became one of the most sought-after bike photographers worldwide. He knows the bike sport and the scene like no other. His eye for the right motif is infallible and his timing for the right moment precise. He has been honored several times for his achievements, such as winning the ISPO AWARD in 2015, one of the most coveted prizes in the action sports scene.

Markus Greber is known for his strict work discipline and high standards for his photos. With every shooting he strives for the perfect picture. A few years ago he did a photo shoot for a well-known bike producer at "Rosengarten" in the Dolomites. The shooting plan included a breathtaking advertising motif that captivates the viewer. The Rosengarten is located between the Tierser Tal in South Tyrol and the Fassa Valley in Trentino. Excursions on foot or by bike are possible at any time along the gigantic network of paths through the unspoiled nature. The Catinaccio is famous for its beautiful shades of red at dusk. Its height, width and freedom can be captured in impressive photos.

During the shooting tour Markus Greber succeeded in one of the lucky shots of the last years. The shot "Crossing Rosengarten" was the cover motif on the American National Geographic Travel and placed on many double pages in renowned magazines.

For the Leica "Nature Day", Markus Greber printed a run of 100 high-quality fine art prints. In addition to practical tips on sports photography, the professional signed the prints and presented them to the workshop participants as a special guest gift. One signed print was stylishly presented during the event in a black aluminum magnetic frame from HALBE with a passepartout in the Leica Store.