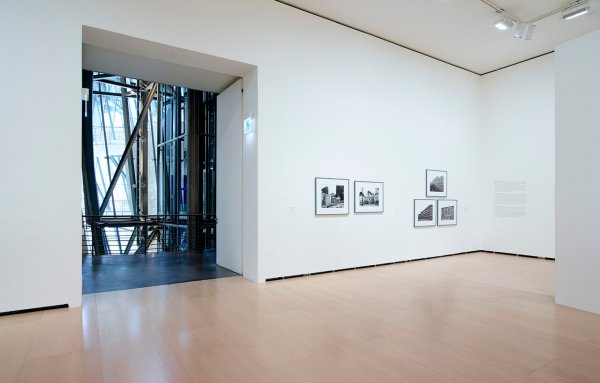 Unconscious Places is the name he applied early on to that portion of his street photographs that originated in Düsseldorf and went on to include London, New York, as well as Japan, China, Korea, Peru, and Russia. As the title implies, Struth does not concern himself with the showy avenues, promenades, or famous boulevards on which big cities like to pride themselves. Of interest to him and to the growing number of those who interpret his work—sociologists, urban planners, and architects—is the directly or indirectly recognizable interaction between built-up urban space and the inhabitants thereof, the human beings who, although they seldom appear in Struth’s photographs, are just as shaped by their structural surroundings as they themselves shape it. Architecture and urbanity, local building traditions and international style, past and present, geographic idiosyncrasies and tendencies toward globalization—all the things that are usually only unconsciously perceived are brought image-by-image to the conscious level by Struth’s austere and carefully composed photographs of unspectacular streets.

A selection of these works was last shown in Thomas Struth's most extensive exhibition at the Museo Guggenheim Bilbao (October 02, 2019 - January 19, 2020). They were framed in CONSERVO magnetic frames by HALBE, with image protection and Mirogard museum glass. The filigree special strip of solid wood, lacquered in a grey tone defined by the artist, is to a certain extent Struth's trademark in framing the pictures and optimally emphasizes the effect of the pictures without drawing too much attention to the frame.