Targeted emphasis on contrasts directs the viewer's gaze to the essentials

Kirchen, Jan. 7, 2021 - As early as 1915, the artist Kazimir Malevich knew what the colours black and white were capable of. His oil painting "The Black Square" on a white background is considered one of the icons of 20th century painting. Black and white pictures exude a special charm - no matter whether it is a photograph, a graphic or a painting. BLACK & WHITE means focusing on the essential. Lines, shapes, contrasts as well as light and shadow play a decisive role in the composition of the picture. Photographs by masters of their trade have an incredible depth effect and fascinate with their beauty and brilliance. The right choice of framing supports the effect and value of a picture. With the individual picture frames from HALBE, every work of art is perfectly staged - appreciated by galleries, museums and art lovers.

Black and white works of art - expressive and authentic

Black and white artwork is something very special and has experienced something of a renaissance in recent years. The image content must speak for itself. By reducing them to the essential, black and white photographs, charcoal sketches and etchings can surprise the viewer and draw the eye to the subject. The greatest possible attention should be paid to the selection of a suitable frame, as it supports the artistic and aesthetic effect.

In order to emphasize the contrast of black and white pictures, a dark frame should be used. Black aluminium or dark oak mouldings enhance the effect of depth in perspective, i.e. all dark areas of the picture stand out more strongly against the lighter areas. If the lighter areas are to be emphasised, a light strip such as a white maple or matt white aluminium profile should be chosen.

If the motif is very dark or very light on cream-coloured FineArt paper, aluminium profile strips in black, silver, medium grey and a wooden strip in white maple are ideal. In a bright white aluminium frame or in white ash, the paper would appear "forgiven".

Old black-and-white photographs that have taken on a sepia character over the decades, i.e. the black portion has turned brownish due to UV radiation and the white on the paper has turned yellowish, develop their radiance perfectly when framed in brown alder or natural walnut. The dark brown wooden frame makes the black parts of the old photographs look really black again. For graphics and charcoal sketches, warm metallic tones, such as matt gold anodised frames, are ideal.

When framing black and white pictures, it is also important to ensure that the passepartout has an appropriate width. Small pictures up to the size of 10 x 10 cm require a disproportionate passepartout. Otherwise, the width of the passepartout should be about 10 - 12 percent of the longest side of the picture. "Large works of art can be framed flush, but often they look more imposing if they are additionally framed with a passepartout," says David Halbe, managing director of HALBE-Rahmen GmbH.

Released motive in the foldingpassepartout - the absolute eyecatcher

Particularly black-and-white photographs from the 1920s and 1930s are usually only available in the formats 4.5 x 6 cm or 6.5 x 9 cm and have a beautiful deckle edge. These unique exhibits as well as prints with signatures require special framing. In order to show them off to their best advantage, the professionals at HALBE recommend framing them with a folding framepassepartout. This means that the motif is positioned exactly in the passepartout cut-out on the back board of the passepartout, for example with transparent photo corners.

The passepartout is then folded shut. The pictures are thus framed with an additional white border in the passepartout, which creates a beautiful optical effect. The signature of the artist or the deckle edge are not covered, but are also staged.

Not all glass is the same

Valuable black-and-white exhibits should be framed behind glass so that they are protected from dirt, mechanical damage and, above all, from damage caused by UV light. Furthermore, the glass has a great influence on the effect of a picture. There are many different types of picture glass on the market with different properties that have to be weighed up when framing an exhibit. To achieve a reflection-free and undistorted view of the original, as without glass, photographers, art collectors and galleries prefer to use anti-reflective museum glass with increased UV protection.

Colored wall surfaces are an ideal tool not only to change the effect of rooms, but also to give a stage to a special black and white image. Whether the wall is painted in dark red, blue or even deep gray, it acts as an "extra" passepartout. The stark contrast of the colours creates interest in the viewer. Museums like to use this practical stylistic device for a reason.

On the homepage www.HALBE-rahmen.de you will find in the WISSENSBEREICH many practical tips and suggestions on the subjects of "framing and hanging pictures". 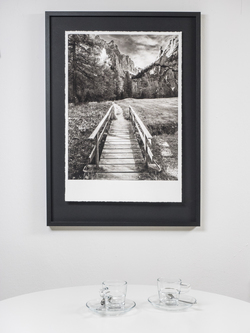 To emphasize the contrast of black and white pictures, a dark frame should be used. Black aluminium or dark oak strips enhance the effect of depth in perspective. (Photo: Fineartprinter Magazine)

If it is a very light motif on cream-coloured FineArt paper, aluminium profile strips in silver, medium grey, black as well as a wooden strip in white maple are excellently suited. 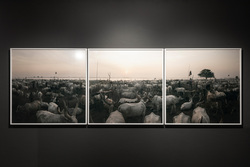 Impressive panoramic shots in black and white, for example, unfold their full radiance as a picture framed in several parts (photo: Gian Giovanoli). 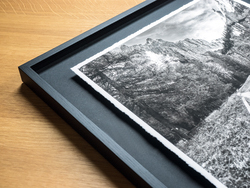 High-quality black-and-white pictures on handmade paper are shown off to their best advantage in a free-floating frame. (Photo: Fineartprinter Magazine) 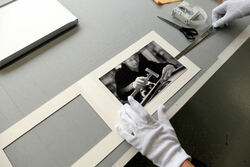 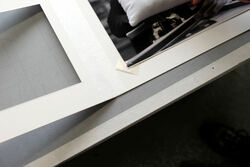 Unique exhibits as well as graphics with signatures require a free framing with foldingpassepartout, i.e. the motif is positioned exactly in the passepartout cut-out on the rear wall cardboard of the passepartout, for example with transparent photo corners. 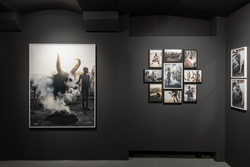 Wall surfaces painted in colour are an ideal tool not only to change the effect of rooms, but also to provide a stage for a special black-and-white picture (example: exhibition by Gian Giovanoli).

We have compiled these and other high-resolution images for you in the following dropbox - image rights: @HALBEFrames