The Museum Ratingen has been hosting the new exhibition "Superland Superrheinland" with works by Renata Jaworska since September 8. In her paintings and drawings she thematizes topographies with the traces of people's movements, which she inserts into the depictions. In the process, different forms emerge, which result from the idea of the function of a path. This gives them a reality of their own, marking the process of appropriation. In this way, maps are redesigned both imaginatively and in reality, and become controlled or controllable territory. The exhibition is accompanied by a catalogue, which is available in the museum shop. As part of the accompanying program, an artist talk with Prof. Dr. Robert Fleck, Prorector of the Düsseldorf Art Academy, will take place on October 25 at 7:00 pm.

The exhibition can be visited until January 6, 2019, Tuesdays to Sundays from 11 am to 5 pm  . The Museum Ratingen can be found at this address:

Renata Jaworska was born in Poland in 1979. She studied painting at the Kunstakademie Düsseldorf from 2000 to 2006, most recently as a master student of Jörg Immendorff. Since 2017, she has been increasingly concerned with topographies, maps and districts. In this context, she repeatedly encounters the question of belonging, which she deals with intensively - also in an artistic sense. In reference to the novel "La carte et le territoire" by Michel Houellebecq, she distinguishes the topographical map, an image of the visible surface of the earth, from the territory that the map covers, without, however, revealing its essence. For with the concept of territory, Jaworska also always associates a territorial claim and the desire for appropriation.

For the exhibition "Superland Superrheinland" Renata Jaworska relates this approach directly to her current living environment, the Rhineland. The title of the exhibition refers to the work of the same name by Peter Brüning.

With his so-called "traffic landscapes", Brüning developed a new type of landscape painting by inserting symbols and pictograms into his painting, which he borrowed from cartography. Jaworska not only takes up Brüning's definitions of concepts, but also treats the same places that once corresponded to his reality of life and now correspond to hers. 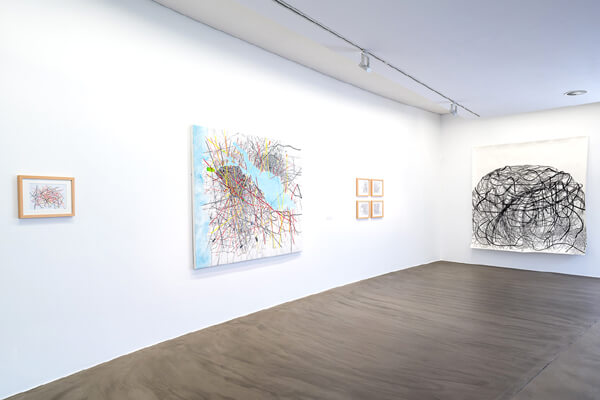 The exhibition is presented in HALBE frames. The picture frames support the expressiveness and aesthetics of the pictures and highlight them without themselves coming to the fore. In this way, picture and frame merge to form an impressive unit.

For more information, please visit the homepage of Renata Jaworska, as well as her blog. 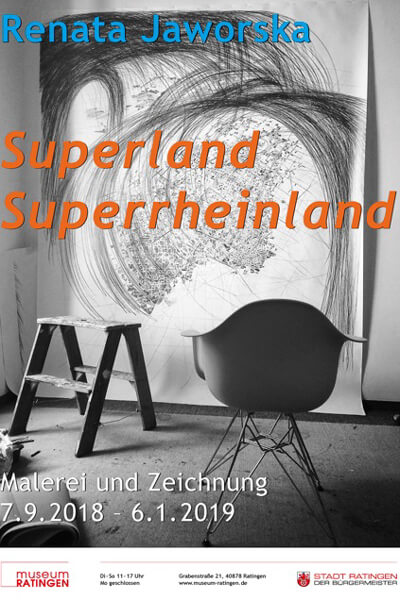