The project "gute aussichten-junge deutsche fotografie 2018/2019" is already in its 15th year. One of this year's award winners, Malte Sänger, is also presenting his exhibition "Abdrücke" there. From 06.04.2019 to 10.06.2019, the works of him and the other prize winners can be admired at the Landesmuseum Koblenz at the Festung Ehrenbreitstein.

At the center of Malte Sänger's works is the theme of flight. He transforms cell phone photos of fleeing people that he found on social media channels into real locations on satellite images with the help of the associated metadata. He then marks these with pins. The images are supplemented by the original photos of the refugees, provided with real metadata and text fragments. In this way, personal and everyday situations of the refugees can also be depicted.

What is special about the original photos is that they are exposed on light-sensitive photographic paper. Within one exhibition day the pictures fade, thus making it clear that one can only look at a fragment of this person's life before its trace dissolves. The only thing that remains are the marks on the satellite images.

Malte Sänger was born in Frankfurt am Main in 1987. From 2009 to 2018 he graduated in Visual Communication at the Hochschule für Gestaltung in Offenbach am Main, where he also lives and works. 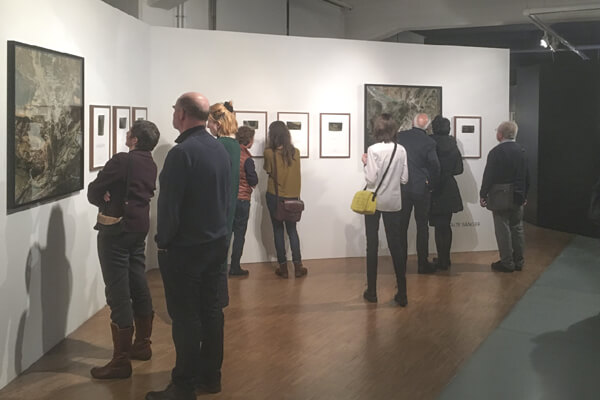 The works are presented in distance frames from HALBE with the dimensions 100cmx100cm. The light-sensitive photo paper and the text are framed in 35cmx50cm. The noble frames show the photos to their best advantage and allow them to unfold their effect perfectly.

A catalogue of the same name has been published in German and English to accompany "gute aussichten - junge deutsche fotografie 2018/2019". It presents the nine award winners and their work in words and images on 224 pages.